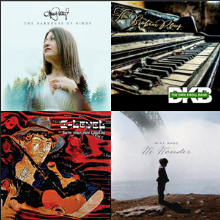 It’s time to embark on a new sonic exploration that stimulates the mind, rejuvenates the soul and delights the ears.

That exploration is known as “The Stratton Playlist.”

Each month, we’ll be sharing a fresh batch of specially curated music from emerging and established artists, including Amy Petty, Mason Summit, Mac Saturn and others, on Spotify.

This inaugural playlist includes 34 tracks from acts based in Michigan, Ohio, New Jersey, California and the U.K. It nicely reflects the multi-genre approach we take with profiling and featuring different artists on “The Stratton Setlist.”

Take time to absorb and enjoy some of our favorite tracks from an incredible group of artists.

For their latest album, C-Level kindles a fiery blend of funk, punk, blues and reggae.

“It’s about burning your own gasoline, running off your own fuel and inspiration, and the driving force behind it. We’ve been hustling real hard to get better spots and other sounds and stuff together, and we’ve been running off our own ambitions,” said Deitke about the band’s fourth album, which dropped Friday.

“That’s a traditional blues thing that Cody and I used to cover in a lot of renditions of the band. A lot of this record is getting stuff we’ve done down the way we wanted to have it,” said Deitke, who formed the band with Crose in 2010 and added Boland to the lineup three years ago.

Deitke, Crose and Boland also shine on the album’s melodic third track, “Wherever I Go,” which weaves tremolo guitars with delicate cymbal taps and pulsating drums into a heartfelt ode reminiscent of the John Butler Trio – “Leave a mark they can’t remove/Streets wear through souls and wear through shoes/Breathe in cold air/Exhale, find a trace of her there/Wherever I go, I hope you are there/And wherever I go, I hope you are there.”

Another sultry track includes the funky reggae-inspired “For Some Account” with island-like guitars and deep, relaxing bass to transport listeners to a tropical getaway. A chorus of “oohs” beautifully backs this six-minute mental escape – “Know these words you speak are true/Cuz everything I see I like in you/Don’t turn it inside out/And leave me with no room to doubt/I know/For some account I know.” END_OF_DOCUMENT_TOKEN_TO_BE_REPLACED

For Bobby Pennock, a new decade will bring more chances to perform live as a solo artist.

This month, Pennock will make a rare live solo appearance opening for Jeff Scott as part of the Farmington Civic Theater’s “LIVE!” 2020 winter concert series. His Jan. 17 opening set will include acoustic-filled gems from his collaborative and solo projects, including The Pennock/Stephens Project and Taller Than They Appear.

“I know there’s already going to be songs from each of those in the set,” Pennock said. “I’m also doing a new song that’s one of the latest ones Mike Stephens and I wrote called ‘Circling Back to You.’”

In 2018, Pennock released a striking folk rock album called “The Pennock/Stephens Project” with the late singer-songwriter Mike Stephens, who passed away from cancer in October. The duo met years earlier through Myspace when Stephens hosted a podcast called the Open Mike Café and eventually developed a strong friendship.

Throughout the years, Pennock and Stephens wrote an extensive catalog of folk rock songs and decided to release their self-titled debut album as a duo. At the time, Stephens had relocated to Colorado to live near his daughter as he battled long-term health issues, but later returned to Michigan.

“He was diagnosed with cancer, and our good friend who lives in Nashville, M.J. Bishop, set up a GoFundMe, and then I wanted to do something else,” said Pennock, who also performed with guitarist Terry Birkett as part of the project.

“Mike and I had continued to write songs together, and I got the idea of recording an album and the proceeds of which would go to him for his medical costs. That’s how that album came together, and my friend John Finan said he’d record it for free.”

END_OF_DOCUMENT_TOKEN_TO_BE_REPLACED

Ypsilanti’s After Hours Radio will officially sign off this week.

“We had a lot to celebrate this year with our five-year anniversary and the brief return of our original lead singer, Calum Galt. No matter how successful a band can be with longevity, ultimately, there are going to be some challenges on an interpersonal level between people,” said Hughes, co-founder of After Hours Radio.

“There have been a lot of changes in our lives as well as ideas about how we want to approach being in the band and writing songs. We’re just trying to end things so we can explore opportunities that better align with our interests, goals and preferences.”

Hughes co-founded After Hours Radio with Erickson in 2014 after performing at the Nakamura and Luther Buchele co-ops while attending the University of Michigan. Together, they cut their musical teeth  at co-op open mic nights and introduced a freeform musical approach that incorporated several genres.

That freeform musical approach resulted in the band’s self-titled debut EP in 2015 and their follow-up EP, “What Happened?,” in 2017. With Hughes and Erickson at the helm, After Hours Radio went through some lineup changes, including several drummers and the recent departure of keyboardist and synth player Jordan Compton, and expanded their sound to include more electronic effects.

Last year, After Hours Radio launched their own do-it-yourself (DIY) music venue, The Late Station, in Ypsi to showcase local emerging artists and musicians across a variety of genres. Bandmates and friends helped promote events, run the door and assist with gear at The Late Station.

END_OF_DOCUMENT_TOKEN_TO_BE_REPLACED

For more than a decade, the heavy psychedelic soul sextet has planted a series of studio and live album online releases for fans. Throughout their extensive digital catalog, Tree No Leaves fuses eloquent rock, funk, world and jazz sounds while maintaining a melodic and lyrical based center.

“This record was supposed to be a throwback to more of a live sound and have a bare minimum of post-production. The reverb on the record itself is the reverb from the recording studio. It was recorded at The Mohawk Studio, which is a beautiful 185-year-old church in Sandusky,” said Dustin Galish, the band’s vocalist, pianist, organist, synthesist and guitarist who initially started Tree No Leaves as a duo with wife Sarah Galish.

“All the real sounds you’re hearing were done there, so it’s not post-production echo or reverb. For us, that was kind of cool, especially because we were going to vinyl, and we had never done that before. We didn’t want to get too tricky with what we were doing for the mixing and mastering, so there’s a lot of traditional old school layering to get effects.”

Along with longtime bandmate, guitarist and organist Calvin Cordy, Galish wrote and arranged eight to 10 tracks for “Prophet Holographic” centered around rhythm and double percussion.

END_OF_DOCUMENT_TOKEN_TO_BE_REPLACED

For Kim Richey, tonight will serve as a Midwestern musical homecoming of sorts.

The Nashville roots singer-songwriter, who originally hails from Dayton, Ohio, will perform tonight at 20 Front Street in Lake Orion with Australian singer-songwriters Jordie Lane and Clare Reynolds. It will be Richey’s second time performing at the 100-seat intimate acoustic music venue.

“I always try to do songs from all the records, at least one or two from every record. I’ll be playing a lot of stuff from ‘Edgeland,’” said Richey during a phone interview from Banff, Alberta. “It’s such a blast to sing with people who are great singers, so we have a lot of great harmony things going. Clare plays keyboards and percussion as well, Jordie plays electric guitar, and I play acoustic.”

On her latest album, “Edgeland,” Richey moves through the topography of life as a woman committed to following her music. She chronicles missed train rides, cautionary tales of dangerous love, potential new pathways and other self-discoveries on the 12-track Americana-infused project.

From the Buck Owens/Don Rich opening notes of “Red Line” to the Laurel Canyon lushness of “The Get Together” to the Dusty Springfield-inspired “Can’t Let You Go” to the somber “Black Trees,” Richey’s husky crystalline alto sweeps listeners up in a whirl along her heartfelt auditory journey.

“Once every few years, you pick a dozen songs or so for a new album,” said Richey, who’s also lived in Los Angeles and London. “I think those songs reflect where I was at the time while making the record, but I have a home now, so things have changed.”

END_OF_DOCUMENT_TOKEN_TO_BE_REPLACED

On their melodic self-titled, full-length debut studio album, Chirp knows how to magically capture and beautifully deliver the sweet, groovy sounds of spring.

Today’s release of “Chirp” celebrates the Ann Arbor funk, prog rock and jazz fusion quartet’s creative migration from improvising on the stage to nesting in the studio.

“Those songs turned out how we really envisioned them because we were able to take a long time to plan everything out as well as record and mix,” said John Gorine, Chirp’s drummer. “When we play those songs live, we know what we want to do, but it’s different when we have a lot more time to plan certain things out and just get what we want out of those songs.”

Chirp does their share of genre-hopping by blending catching progressive rock, funk and jazz originals with majestic reinterpretations during their high-energy, dynamic shows. Though their music incorporates many technical, well-crafted elements, they’re committed to grooving with a solid, dedicated fan base.

For dedicated Chirp fans, the album is a direct sonic flight through their eclectic catalog without any layovers or turbulence. While hearing “Chirp,” listeners travel smoothly through a series of glistening grooves, riffs and beats eloquently condensed into a brilliant studio package.

“You want to trim the fat a little bit, even though most of the songs are on the longer side of what people are used to hearing. I’d say the average song length on the album is five and a half minutes while our average live song length is between eight and 10 minutes,” said Jay Frydenlund, Chirp’s guitarist and vocalist. “As a songwriter, for me, it’s always difficult figuring out what we want to cut down and how we want to cut down the length of a solo section or maybe take parts out.”

END_OF_DOCUMENT_TOKEN_TO_BE_REPLACED

The Stratton Setlist
Blog at WordPress.com.