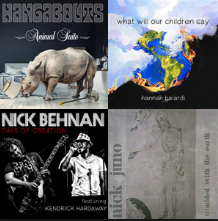 With sunny days and warm nights, we’re ready for another summer filled with unforgettable music from local and regional artists.

Featured artists include The Hangabouts, Hannah Baiardi, LEVELS, Adventures with Vultures, Erod, Michael Snyder-Barker, Nick Piunti & The Complicated Men, Laszlos Forest and more. Sit back, enjoy some rays and soak up some new tunes to jump-start your summer.

Interested in becoming part of “The Stratton Playlist” on Spotify? Send your submissions to strattonsetlist@yahoo.com. All artists and genres are welcome.

“I still have dreams about being there and walking through the pathways to the Thames River. I made such a big deal about the village they’re in because there’s a red phone booth, and it was used as a book depository. I’d walk around the village and the fields on the days I wasn’t recording and would listen to music,” said Paddock, who’s a longtime friend of the U.K.-based Richards.

“It was good to have that extra time there because we were able to do a bonus track and do the acoustic version of ‘No One Fights Alone.’ I was able to work more on ‘Sunshine Smile’ and get more into what I want to feel.”

“My hope in sharing all of it is there are people out there who hear and can relate to it in their own way. It always helps me cope when we perform the songs at one of our acoustic shows, and I can either see someone reacting in the crowd, or they talk to me afterward. I am so fortunate to be able to live my passion as well as how much it has helped me heal me,” Paddock said.

END_OF_DOCUMENT_TOKEN_TO_BE_REPLACED

This month, we’re springing forth with a new edition of “The Stratton Playlist.”

We’re also taking future submissions for upcoming editions of “The Stratton Playlist” at strattonsetlist@yahoo.com. All genres are welcome.