“He was the man in that movie, like a lot of people overlook that. He was the realest one. He wanted to tell the homeboy, ‘Like Yo, we’re going to be roommates together. You just need to tell him,’” said Jeremy Ian Doneghy-Horrington, aka FROSTisRAD.

“He’s the only one who ended up with the girl at the end. He was rolling with the cops shooting the guns, like he was the man. He was overshadowed; he needed more props.”

That newfound “McLovin” self-assurance also prompts FROSTisRAD to accept his true self and look past others’ shortcomings and hang-ups. He developed the initial reflective concept for the track while recording it in his home studio.

“I know I’m gonna be friends and forgive people when they do shit. Because that’s just my nature, it’s the kinda guy that I am. It’s just a battle in my head if I’m gonna stay mad at people,” said Doneghy-Horrington.

“I feel everyone doesn’t do things purposely or intentionally to hurt each other. It’s just based on how they’re feeling that day, and they don’t know how to fucking manage the way that they feel or treat people sometimes.”

END_OF_DOCUMENT_TOKEN_TO_BE_REPLACED

The Los Angeles hip-hop singer-songwriter poetically shares her innermost thoughts about authenticity, self-awareness, passion and growth on her vintage-inspired debut album, LovelyOcean Forever, which dropped Aug. 14 via all streaming platforms.

“Forever started off with the idea of manifesting how I wanted my 2020 to go. I wanted to speak my wishes into existence through music. Words are some of our most powerful forms of manifestation. The themes in this album just came naturally since they’re real experiences,” she said.

It’s the type of cassette artists would pass back and forth to create a stronger sense of camaraderie, collaboration and community. The exquisite “Forever (Intro)” sets an ideal old-school tone as the mixtape instantly clicks into a worn boombox and compelling skits from “The Maury Povich Show” are interspersed throughout the brief track.

Quiet, thoughtful piano echoes LovelyOcean’s introversion and peaceful presence as she reflects, “I could try to be louder or extroverted, but there’s beauty in my silence. From my silence comes observation, awareness, a story, a song, a forever.”

“I want to say that I started writing in February of this year, but once quarantine started I put everything on pause because I was super uninspired. One day I woke up, listened to two beats and then just started writing. All in all, it took three months to get everything written, recorded and edited. We converted a closet in the living room into our studio so every track recorded was in the closet,” LovelyOcean said.

END_OF_DOCUMENT_TOKEN_TO_BE_REPLACED

“I think everywhere we go, we’re very inspired by where we are. I’m always a huge advocate for what’s happening in Detroit and so that drove a little bit of the inspiration as well as the sounds and what we captured while we were here and being together, too,” said Rod Wallace, East Grand executive producer and a metro Detroit hip-hop producer.

Together, the producers, musicians and curators brought initial stems, beats and samples to lay the foundation for their fifth collective project while magically capturing the authentic vibes of the Motor City. They also visited local record stores and dug through crates to find alternative sounds that could inspire music for East Grand.

“I think part of what’s built into the culture of digging and sample-based producing is taking the most obscure music possible and trying to pick something out of it. Customarily, we don’t necessarily look for music based on who’s making it, but we look at the potential vibe and sound that could be involved. It may just be something that we don’t have, like something with church bells,” said Wallace, who’s been part of Dirty Ol’ Men since their formation in 2014.

END_OF_DOCUMENT_TOKEN_TO_BE_REPLACED

In Detroit, he combines catchy beats, raps and melodies with personal experiences to share with growing crowds at open mic nights and DIY shows.

In Columbia, Erickson becomes the main character, Booker DeWitt, from the “BioShock Infinite” video game and battles racism and elitism in the namesake fictional dystopian society.

“These songs are based on real-life experiences that I’ve had, but they also coincide with certain elements of the game,” said Erickson, aka Eric Carter. “When you play the game, you don’t know what the character looks like because it’s first-person. For me, this EP is more about how I felt playing this character.”

“They both feature two guys who have nothing to lose and are working toward this goal. All in all, they both don’t get there,” he said. “At the end of ‘Vanishing Point,’ the main character needs to get to California by 3 p.m., and he’s got this beautiful 1970 Dodge Challenger. In ‘BioShock Infinite,’ a guy has  been tasked with trying to find a woman’s father. He eventually learns he’s her father, but in a different universe.”

Erickson’s sonic travels continue through “The Handbook” and “Cha$e” and allow listeners to draw deeper parallels between his personal experiences and “BioShock Infinite.”

On “The Handbook,” Erickson introduces a slow, introspective jam about how actions have consequences, whether good or bad. “I thought it was something everyone could relate to cause as humans we all have run ‘what-if’ scenarios through our heads regarding one thing or another, and sometimes the perpetual regret we live with and/or die with no matter the outcome we choose.”

For the “Cha$e,” Erickson opens the EP’s closing drack with deep synth beats reminiscent of early ‘80s Atari music. The track was influenced by an earlier portion of the “BioShock” video game series that intersected with Erickson’s life.

“When I first played it, it was almost like a ‘blink and you’ll miss it’ kind of moment, which is wherein it intersects with life. You know, one day you’re eating cereal watching Saturday morning cartoons, and the next thing you know, you’re graduating high school and/or college, and then life pretty much happens,” he said.

“When I wrote ‘Cha$e,’ I wanted to define this same approach with the harsh instrumental, but the lyrics sort of glide over it, and this is like a metaphor for life and people. Meaning, life can be tough, but as long as you keep a positive outlook, everything will be OK.”

END_OF_DOCUMENT_TOKEN_TO_BE_REPLACED 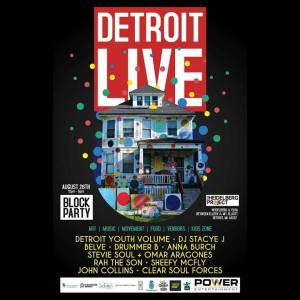 Clear Soul Forces, John Jammin Collins and Rah the Son will represent some of the city’s best musical talent and lead the inaugural Detroit LIVE at The Heidelberg Project Saturday.

Together, they’ll showcase emerging and established hip-hop, techno and other music during the free block party hosted by POWER Entertainment and The Heidelberg Project.

From noon to 8 p.m. Saturday at 3600 Heidelberg St. in Detroit’s McDougall-Hunt community, attendees will hear seven other rising musical acts as part of the Detroit LIVE. There also will be an open mic session for other performers interested in demonstrating their talents.

“We want to build a sense of community while featuring Detroit talent and celebrating The Heidelberg Project’s 30th anniversary,” said Donna Kassab, a POWER Entertainment owner and Detroit LIVE creator.

The Stratton Setlist recently spoke with Clear Soul Forces, John Jammin Collins and Rah the Son to learn more about their music and upcoming performances at Detroit LIVE.