A blend of Motor City sunshine, art and music formed a new creative and collaborative vibe during the inaugural Detroit LIVE at the Heidelberg.

That vibe pulsated throughout Heidelberg Street as more than 2,000 attendees enjoyed family, friends, festivities, food and fun at the free Aug. 26 block party near the city’s iconic art installation. 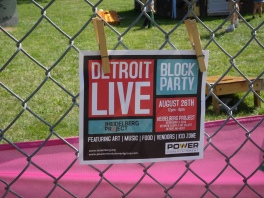 “This Detroit LIVE event at the Heidelberg is a collaboration,” said Jenenne Whitfield, CEO for The Heidelberg Project. “It’s a celebration of all the cultures in the city of Detroit and of all the grassroots initiatives. I want a party in the middle of the street. I want to show Detroit how it’s really done.”

“Everyone’s here to celebrate each other as well as music and art,” she said. “Let’s have some fun.”

DJ Stacye J kicked off a groovy 30-minute mix of dance and R&B while a team of fitness enthusiasts worked out with Terra Castro from the Detroit Body Garage and Yoga Dan Gottlieb. Participants jumped through mini obstacle courses, juggled fitness balls, experimented with yoga and ran to the beat of the music.

Once the community workout came to end, a group of young budding violinists took the stage to demonstrate their musical chops. Led by Clara Hardie, the Detroit Youth Volume students played a set of enchanting classical tunes and a cover of Sam Smith’s 2014 smash, “Stay with Me.”

The students played hip-hop and perpetual motion jazz violin while following the Suzuki method, which applies the basic principles of language acquisition to learning music.

“They can listen to each other, they can just play together without even a conductor,” Hardie said. “It’s also an example of their empathy for each other. They’re aware of each other, and that’s an important part of why I’m a violin teacher is to develop empathy for others and perseverance and the ability to collaborate with each other and creativity. That’s actually what’s important to me, not the violin.”

After Detroit Youth Volume, Frontier Ruckus member Anna Burch played several songs from her debut album, “Quit the Curse,” which will be released next spring, and reflected on being part of Detroit LIVE.

Her infectious indie pop and bright guitar tones served as the ideal soundtrack to the laid back, artistic atmosphere of Detroit LIVE.

Later in her set, Burch pulled out a pair of sunglasses before singing “2 Cool 2 Care” and thanked her Frontier Ruckus bandmates for providing moral support during her performance.

Detroit LIVE also picked up another groovy vibe with the rock and R&B infused sounds of Stevie Soul + Omar Aragones.

Together, the powerhouse duo sounded more like a stage full of musicians due to Soul’s incredible beat box abilities and Aragones’ soothing vocals and guitar.

Soul and Aragones provided delectable covers of The Black Keys’ “Never Gonna Give You Up” and Rodriguez’s “Sugar Man.”

As an established beatboxer, Soul mimics trumpets, drums, percussion and tons of other instruments with just a microphone. It’s truly a one-person rock and soul symphony based in Detroit.

Drummer B and Belve

Detroit LIVE continued to find its groove with Drummer B at the helm. Leonard Ware, a Detroit-based DJ, music engineer and producer, spun an eclectic mix of dance, R&B and disco during his set, which provided the perfect beat for the Motor City.

Meanwhile, Belve quickly turned the beat around to a high-energy hip-hop show and performed tracks from his debut EP. Clear Soul Forces’ Jarrel Lowman (L.A.Z.) also took the stage to perform with Belve, and together, the two bounced fast-paced rhymes off each other while simultaneously dazzling the crowd.

Known as Rah the Son, Rahbi Hammond shared his hip-hop introspection and theatrics while performing four new tracks from an upcoming project called “Wet Paint” as well as songs from “Sunny Detroit: The Story of + and -.”

Throughout his set, Hammond also would comically engage the crowd and his band in a musical conversation.

The crowd laughed and danced in response to Hammond’s inquiry. By combining his theatrical talents with hip-hop, Hammond truly invigorates the crowd with his brilliant performance artistry.

Next up, legendary DJ and producer John Jammin Collins played an incredible mix of techno that seamlessly weaved one song into the next and responded instantly to the crowd’s movements.

A group of dancers, including staff from The Stratton Setlist, moved until their feet went numb.

It was proud moment for Detroit LIVE attendees as they danced to the techno sound that originated in the Motor City nearly 30 years ago.

Nearby, a group of kids tested their breakdancing skills with Maurice Archer from the Geechi Crew while Collins provided the ultimate sonic backdrop.

Emile Manette (E-Fav), Jarrel Lowman (L.A.Z.), Jarred Douglas (Noveliss) and Kortez Marion (Ilajide) bounced on stage as they engaged in an infectious hip-hop dialogue with one another and the audience.

Together, they quickly traded off rhymes from one member to the next while Marion mastered the beats as Clear Soul Forces’ emcee.

The group is a forced to be reckoned with live – they each contribute their own style, flair and talent to result in one of Detroit’s most promising hip-hop acts.

Toward the end of their set, Clear Soul Forces vigorously performed “Get No Better,” a crowd favorite from 2012. It was the right song to hear toward the end of Detroit LIVE because it couldn’t get any better.