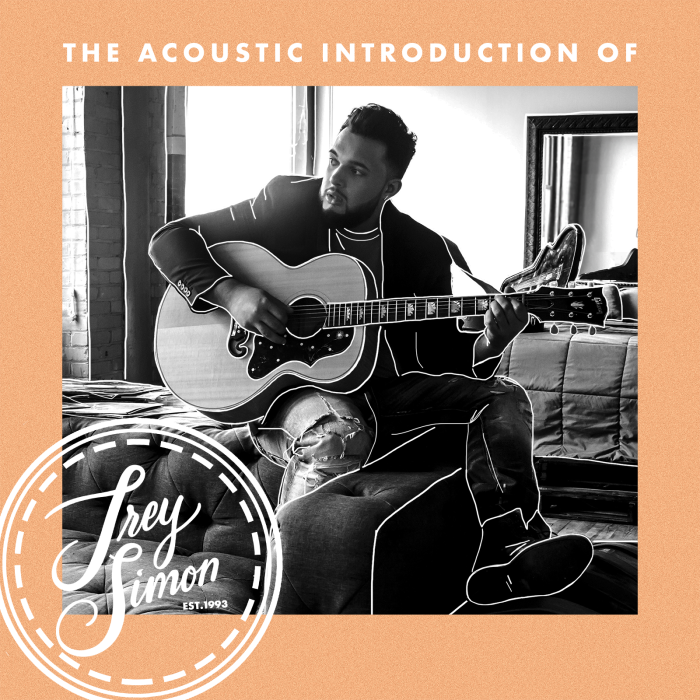 Trey Simon knows how to make an introduction – an acoustic one, that is.

The Rochester, Mich., soulful singer-songwriter will introduce his latest EP, “The Acoustic Introduction of Trey Simon,” to fans at 8 p.m. Friday during a special release show at Lake Orion’s 20 Front Street.

Simon will play tracks from his current EP, debut songs from his upcoming full-length album and perform with special guests Kenny Watson and Stephie James.

“We’ll have physical copies of ‘The Acoustic Introduction of Trey Simon,’ which will have bonus tracks from the full-length that’s coming out,” Simon said. “If people buy the CD, then they get the four acoustic songs, but they also get one-minute clips of these full-production songs that are coming out.”

Simon released the four-song “The Acoustic Introduction of Trey Simon” EP in July as a follow-up to his 2014 debut EP “What the Future Holds.” With “Acoustic Introduction,” Simon and Grammy Award-winning engineer and producer Quentin “QueWeezy” Dennard II opted for a simple, stripped-down sound with upbeat pop songs and romantic, soulful tunes.

“My whole vision for the EP is that I really want to build a relationship with people. I’m not looking to get rich quick, I’m not looking to become some big overnight thing,” Simon said. “I really want to build a community and movement around my music and with people. I want people to fall in love again, I want to blend cultures together, and I think the best thing to do is just give people an unfiltered, un-jazzed, unpretentious, just right-to-the-core introduction of me.”

While recording “Acoustic Introduction,” Simon and Dennard built the EP’s organic sound around the acoustic guitar and simple instrumentation, including a cardboard box and human percussion.

“We miked me hitting the side of a cardboard box,” he said. “The only music you hear in the back is me singing the lines and even the percussion noise, the hi-hat, was literally me going ‘tsst, tsst, tsst.’”

While he didn’t grow up in a musical family, Simon’s artistic journey began with a dusty old Gibson acoustic guitar he discovered under his uncle’s bed one day. He approached his uncle about playing the guitar and learned it had originally belonged to his grandfather.

“At first, I didn’t take any lessons. I mostly just hung around the house, and then later on, I had a buddy of mine who came from a very musical family,” he said. “His mom was the first-chair violinist at the DSO, and when we were kids, she would take us to concerts and everything. That really sparked my interest in music. Right when I found this guitar, my best buddy Matt started playing drums, and so I was like, I have to take guitar lessons and learn the basics. I just want to play.”

While he’s been on the Detroit music scene since 2012, Simon’s melodies on “Acoustic Introduction” are an eclectic mix of soul, pop, gospel, jazz, R&B and rock with a Motown vibe. He’s inspired by a cadre of iconic artists, including John Legend, John Mayer, Stevie Wonder, The Dramatics, The Stylistics, Onyx and Nat King Cole.

“Crooners like Nat King Cole had class, they had elegance, and it always seemed like they said the right thing and sang the right thing,” Simon said. “They just had this cool, calm confidence, and me being kind of like a dorky, young guitar nerd who was just trying to figure things out, I just gravitated to that because I wanted to be Mr. Cool, and that was the thing that really did it for me.”

“When I was growing up with my friend’s family who was really musical, the older brother went to Berklee College of Music, and he’s really into production. I went over there, and he showed me John Legend’s ‘Get Lifted’ album,” Simon said. “I heard this guy who’s just a total troubadour with the ballads, and he wrote these love songs. I was like, this is it. I honestly credit that CD with teaching me how to sing. I sang to it because I could hit the notes that he could hit so I could do the runs that he could do, and it inspired everything.”

Simon sought additional inspiration from the artists who would drop by Dessert Oasis Coffee Roasters in Rochester. An employee since 2010, Simon would cross paths with emerging artists on open mic night as well as R&B legends Anita Baker and Philip Bailey from Earth, Wind & Fire. It served as the ideal venue for writing music, performing and growing as an artist.

For Simon, the ultimate musical experience included opening for Patti LaBelle in October at Detroit’s Motor City Casino. After his set, LaBelle gave a shout-out to Simon in front of nearly 3,000 attendees that night. “She’s like, ‘Trey Simon, well listen here, I fell in love with your voice, and we’re going to be doing more shows together in the future, so keep your eye out,’” Simon said.

First Full-length Album on the Way

Since releasing “Acoustic Introduction” in July, Simon has been recording tracks for his first full-length album with Dennard and co-writing songs with Grammy-nominated songwriter Ashley Rose. To date, he’s cut five or six songs and written nearly 30 for the album, which will feature horn and string arrangements as well as a grand piano.

“It’s definitely moving in that R&B, soul direction of really going in that classic love music-type sound,” Simon said. “But at the same time, we’ve also worked on some more pop tunes. I’m really excited to put this music out and show people what I’ve been up to.”

In addition to writing and recording, Simon will be playing two live shows later this month – Sept. 28 at Embers Venue in Rensselaer, Ind., and a Sept. 29 Sofar show in Cleveland. The Sofar show venue will be announced later this month.

Simon believes his upcoming full-length album and growing roster of live shows are the next crucial steps in his evolution as an artist. He’s ready to bring more fans along on his musical journey.

“The true purpose of being an artist is that we go through these life experiences, but it’s the bravery of being transparent and being willing to present your hurts and your insecurities to people so that we can heal in the process of writing and performing these songs,” Simon said. “By taking the process of feeling and growing, we’re giving people the courage and almost sometimes the permission to dive in and go into the process of healing for themselves.”