The Plymouth Americana singer-songwriter remains thankful for a supportive family, an introspective new album, The Lucky One, and a Dec. 3 headlining show at Livonia’s Trinity House Theatre.

“When I look back on it, I still feel like gratitude is the theme. ‘The Lucky One,’ ‘Warren Zevon’s Birthday’ and ‘Sophia’ have threads of gratitude that run through them. Then, there’s some curious pondering of things, like ‘The Only Thing,’ and ‘Voices’ is a little bit mystical,” said Jewett, who recently retired after a long career in program management.

“Yeah, I think almost everybody can probably relate to it in some way, but ‘Guilty’ is the outlier, and I have a fondness for dark music.”

Whether dark or uplifting, Jewett’s insightful music beckons listeners to reflect on their life’s purpose, their favorite moments and the people who surround them. His third release, The Lucky One, provides a thoughtful, folky passage through time across nine astute, indelible tracks.

END_OF_DOCUMENT_TOKEN_TO_BE_REPLACED

“Many people have been locked in their houses, and they haven’t had an opportunity to do anything. Musicheads are shriveling up inside and really need to get out,” said Labeaux, whose Broken Branch ranch is located near Dixboro.

“But then there are the performers and gig workers who have had no place to play, and we have a place where people can gather safely. We can support the musicians who have been hit, provide a place for people to see shows and marry that together here.”

July 31 – James Henes and the Head Full of Ghosts

This specially curated lineup of emerging and established artists stems from Labeaux and Gibson’s desire to support and join different collaborators on their tree-lined, wraparound deck. Labeaux started the Broken Branch Summer Series in 2014 as a way to his friends perform live at home.

END_OF_DOCUMENT_TOKEN_TO_BE_REPLACED 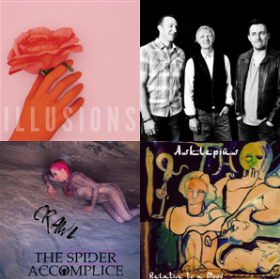 Whether it’s early in the morning or late at night, there’s a new bunch of tasty tracks ready to sample.

Interested in becoming part of “The Stratton Playlist” on Spotify? Send your submissions to strattonsetlist@yahoo.com. All artists and genres are welcome.