A tantalizing blend of acoustic Americana roots will waft throughout the Farmington Civic Theater on Feb. 21.

That blend will include singer-songwriter Rochelle Clark sharing a delectable opening set for Bones Maki and the Blue Water Boys as part of the theater’s “LIVE!” 2020 winter concert series. Special guest Caleb Peters also will open the show.

“Well, it’s not very often that you get to sing in a movie theater, and that in of itself, makes it unique. I wasn’t sure what to expect the first time that I went there, but I love the whole setup that they have,” said Clark, who last performed at the theater in November 2018. “You feel like you’re walking into a performance space, and the audience is really in tune with what’s going on.”

During her opening set, Clark will share raw, poignant tracks from her debut EP, “In Time,” which dropped in January. The EP beautifully chronicles Clark’s creative journey from half of the Americana roots duo The Potter’s Field to a flourishing solo artist.

“I wanted to have a progression of songs that are covers, songs that I helped co-write, and songs that I wrote by myself, and pay homage to where I’ve been coming from and where I’m hoping to go. It started as a creative challenge for myself because I was feeling like I was in a rut creatively,” Clark said.

“Music is really important to me, and I was disappointed in myself that I wasn’t pushing myself more. I started playing out solo shows more, which was scary at first. That was about two years ago, and that steamrolled this whole thing.”

END_OF_DOCUMENT_TOKEN_TO_BE_REPLACED 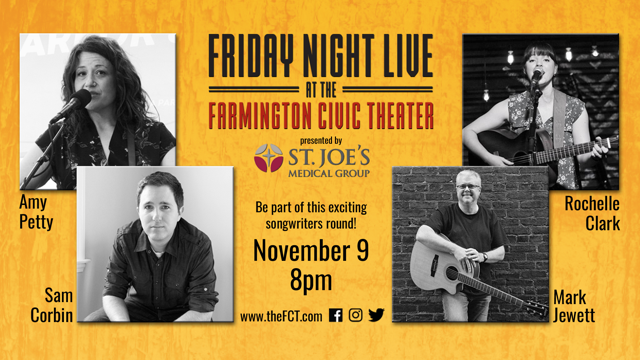 During the show, each singer-songwriter will take a turn performing their own material, tell stories behind their music, delve into their personal creative process and introduce a new track. “There will be some interesting and funny stories probably, and I think everyone in this lineup likes crowd engagement,” Jewett said. “We’re not looking for the hushed symphony audience.”

This is the third time Jewett has teamed up with Petty and Corbin to host a “Songwriters Round” in metro Detroit since May 2017. In the past, they’ve hosted similar events at 20 Front Street in Lake Orion and Trinity House Theatre in Livonia with Chelsea folk singer-songwriter Annie Capps.

Instead, Clark, Ypsilanti singer-songwriter, will join the trio for Friday’s show to share her burgeoning Americana roots music with the crowd.

“We found that we have a pretty good chemistry, and we are able to follow whatever kind of flow the group has got going. I don’t think anyone is coming with a specific setlist of songs they’re absolutely going to play, maybe a longer list they can pick from, but that’s what I like about songwriter rounds,” Jewett said. “They’re dynamic, you can either follow someone’s lead and go deeper into a topic, or if you feel like the audience has had enough of that, then you can do a quick change-up and play something for contrast.”

Tickets are $15 each through Eventbrite.