With her rich, soulful voice, Jena Irene Asciutto sings of a life lived well beyond her 22 years.

Released in June 2017 on Detroit’s Original 1265 Recordings, “Cold Fame” solidifies Asciutto as a powerhouse vocalist and composer who mixes elements of pop, rock and alternative against a cinematic backdrop.

“I wanted it to be a little bit of a story, like a complete chapter of my life,” she said. “A lot of those songs were written in the same period of time so I wanted to take the listener on a little bit of a journey when they listen to it from start to finish.”

“I just want to make people feel something when they listen to my music,” she said. “Some of (the lyrics) are super close-knit because you know exactly what I’m talking about, and some of it’s a little bit more generalized.”

“Cold Fame’s” 14 raw, emotional tracks propel listeners on a sonic journey through self-exploration in “Song of Myself” to the dark side of life in “Black Magic” to peppy “no f*cks given” in “White Girl Wasted.”

To sum up the journey, Asciutto wanted to call her first album something memorable and meaningful. Ultimately, she landed on the heartfelt closing ballad of Band of Skulls’ 2009 eponymous debut, “Baby Darling Doll Face Honey.” Fittingly, it’s called “Cold Fame.”

“That’s my favorite song, and I got it tattooed on my hand. That song in particular is just so emotional for me because of the whole experience,” Asciutto said. “I feel like the title fit the melancholy mood that I was in, and I’m still always in. I’m a happy person, but I feel so much whenever life hits me.”

For Asciutto, her musical life began at age six in Farmington Hills, Mich. At the time, she started writing her own lyrics. By age nine, she discovered her innate talent for music through singing and playing songs on her cousin’s toy keyboard.

“My parents put me in different extracurricular activities to fill up my time other than school,” Asciutto said. “I did a lot of softball, I did a lot of dance like ballet and gymnastics, the whole nine yards. I liked a lot of activities, but nothing really stuck with me until I learned how to play the piano and figuring out that I had this weird, crazy, strong voice that nobody else in my family has.”

After learning a few songs on the piano, Asciutto’s parents bought her one for Christmas. From that point forward, she spent nearly five hours a day in her basement writing and singing. At age 12, she auditioned and became the lead singer in her first band, Infinity Hour, and started writing songs with her bandmates about six months later.

“That’s when my first collaboration started, and after that, I did solo projects here and there and dipped my feet in other genres with other projects. But then after all that happened, ‘American Idol’ came to town,” she said.

American Idol and Beyond 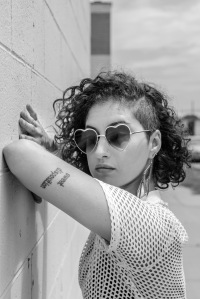 By July 2013, Asciutto learned “American Idol” was coming to Detroit for the first time in 11 years for open auditions. A friend from choir encouraged her to try out for the show.

Asciutto made it to the Detroit “Cattle Call” along with 8,000 other registrants at Ford Field. She waited in line for nearly 12-13 hours the first day with her parents and slowly made it through two rounds of Detroit auditions before getting to the celebrity judges.

“Then, I got through to Hollywood, which was the worst week of the whole competition and the best at the same time because it was the first time we flew out,” Asciutto said. “My mom came with me and traveled with me the whole time because I was 17 when I was on the show, which I’m super thankful for.”

During her time on the show, Asciutto would self-reflect after each performance and wonder if she’d make it to the next episode. By May 2014, she was named runner-up at the end of “Idol’s” 13th season.

“Literally, looking back at the Cattle Call, I asked myself what I’m doing here?” she said. “But you never know. A year later I’m on the stage for the finale.”

By the finale, Asciutto had performed with her favorite band, Paramore, and embarked on a nationwide tour with the other Top 10 contestants from the show. However, reality quickly set in after the “Idol” whirlwind came to a halt.

“I just closed myself off to the world,” she said. “It was probably all in my head, but after going through that experience, I was just trying to process it all to write the album and see what I was going to do next.”

Detroit on a DIME

To find the right professional path, Asciutto met with several labels in New York and Los Angeles, but none were the right fit.

She also met with Randy Jackson, who pointed Asciutto back to Detroit. Around that same time, Asciutto’s mom learned about the Detroit Institute of Music Education (DIME) and its growing presence in the city.

“I loved the vibe as soon as I walked in,” she said. “That was the first time that I actually had a genuine conversation with an adult, and I felt like an equal having a business conversation with someone taking me seriously about my music career.”

Nixon signed Asciutto to Original 1265 Recordings and teamed up with her to co-write songs and produce “Cold Fame.”

She also collaborated with Elise McCoy, singer, guitarist and DIME head of recruitment and admissions, on “Are You Satisfied with My Love?,” “Floating Down the River,” “Now I’m Gone” and “I Want to Hang Out with You.”

“Antea is a mentor. She’s awesome. We’d have a girls’ sesh and talk it out and have a heart-to-heart for each writing session to get ourselves inspired in the moment,” Asciutto said. “Elise is one of the most amazing guitar players. The thing with Elise is that she can literally play with anybody and blend with them and have it be seamless, but still add her flavor to the performance.”

After recording and releasing “Cold Fame” last year, Asciutto admits three tracks are her favorite – “Black Magic,” “White Girl Wasted” and “So I Get High.” Those songs sum up the musical transformation she’s undergone since moving on from her “Idol” days.

“For ‘Black Magic,’ I came up with the whole outline or the skeleton of the song in an hour, and it was one of those songs that I’m just so sure about,” she said. “‘White Girl Wasted’ is such a rebellion song. Still kind of innocent, but you can tell I was an angsty teen.”

As for “So I Get High,” Asciutto reveals the song is about her mom. “I played it for her way before I played it for Kevin (Nixon). I told her, ‘I love this song, but it’s about you.’ She’s said, ‘It could be about anything.’ It definitely does relate to other things in my life besides (her), but I just think it’s such a great song to put in the whole flow of the story since ‘Idol.’”

As for the future, Asciutto is writing new songs and working on her bachelor’s degree in creative songwriting at DIME. She’ll graduate next year.

“Some of the school stuff that I write I end up wanting to use for myself,” said Asciutto, who’s inspired by Lake Street Dive, Tom Misch, Portishead and Ella Fitzgerald. “There’s probably a whole album’s worth of ideas that I have, but I think for this next album I want to write a good chunk of songs because I’m practicing more and more and getting into my sound a little bit more.”

Asciutto is also scheduled to perform at Detroit’s Motor City Muscle, Rock and Car Music Festival on Aug. 18 and the FutureDream festival at WaxWing Studios in South Haven, Mich., Sept. 7-9.