“Having a car-free greenway in Detroit is great. It’s fun to see so many people out walking, running, biking and just hanging out on any given weeknight,” Gaietto said. “When I saw the post asking for musicians to play at the Freight Yard, it felt perfect. Detroiters never have enough summer, so the chance to play outside on a Saturday afternoon is a no-brainer, and with the BUILD Market, food trucks, beer and games, it looked too fun to pass up.”

Gaietto will play her first freight yard show Saturday from 1 p.m. to 4 p.m., and perform her newest song, “Normal Stuff” as well as tracks from her 2016 debut EP, “Some Kind of Heaven,” a few covers and some deep tracks for her headlining set.

Earlier this month, White Bee released a new video for her single, “Beat State,” while Evenson’s latest single, “All My Days and Nights,” is featured on the Detroit Institute of Music Education (DIME) Sessions Vol. 4 album, which drops today.

“I’m excited to have White Bee in the lineup for her vocal talents, guitar chops and songwriting skills. I feel lucky that she was able to hop on the bill at the last minute and bring her talents to the show,” Gaietto said.

“Ally is a student at DIME, where I work. I’ve heard her play a few times for student shows and other events, and kept thinking that she needed more attention from the Detroit music scene at large. I think all three of the songwriters on this show make music that is interesting and often challenges the listener to go a little deeper, while still being accessible ‘smart pop.’”

From ‘Smart Pop’ to Jazz Pop 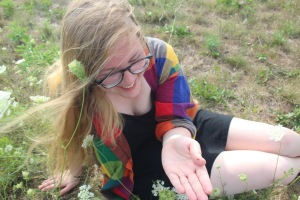 Gaietto released her own version of “smart pop” with her debut EP, which features five fresh tracks fueled with crisp musical storytelling about relationships, introspection and new adventures. It’s the type of jazz-influenced pop Norah Jones should hear, cover and record.

“As a whole project, I had been sitting on a lot of these songs for a while anywhere from four years to six months,” said Gaietto, who credits her mom with the quirky spelling of her first name. “They’re all a span of time. I had all these songs, and I knew I had to record something and do something with them.”

In 2014, Gaietto teamed up with singer-songwriter Gordon Smith of The Kickstand Band and composer, arranger, producer, mixer and multi-instrumentalist Andy Thompson to record, produce and mix her EP. Smith also played guitar and bass on “Some Kind of Heaven,” while Gaietto enlisted Kaylan Mitchell to play cello and Joe Myers to play drums.

Before recording her EP, the introverted Gaietto wrote songs in her bedroom before getting up the courage to perform at open mic nights in Detroit. After honing her live performance skills, a mutual friend introduced Gaietto to Smith, who encouraged her to record and share her songs for a debut EP.

While growing up in Muskegon, Mich., Gaietto took piano lessons and developed a passion for music alongside her younger brother, who’s now a drummer on the side.

As a student at Mona Shores High School, she joined choir, band and orchestra and later studied music at Aquinas College in Grand Rapids before transferring to the now-defunct McNally Smith College of Music in Saint Paul, Minn., to earn her songwriting degree.

“When I wasn’t sure what to study in school, I was at Aquinas, and I met Dr. Paul Brewer, who is the head of the instrumental program there, and he took me under his wing,” said Gaietto, who’s influenced by Nick Drake, Regina Spektor and Jesse Harris. “I graduated high school early at age 16. I was this little baby on campus trying to figure stuff out, and I think Doc saw some potential in me. During my second year at Aquinas, I took jazz vocal lessons with him to learn about harmonies and chord structure. I also took his jazz history class.”

After transferring to McNally, Gaietto strengthened her songwriting skills and formed a band with three friends. Together, the band served as her first professional outlet as a singer-songwriter before taking a job with AmeriCorps and moving to Detroit in 2011.

Three years later, DIME opened up, and Gaietto was eager to become part of the Motor City’s newest school for aspiring musicians. Today, she’s a student services coordinator at DIME and has formed an official band for live shows in Detroit. 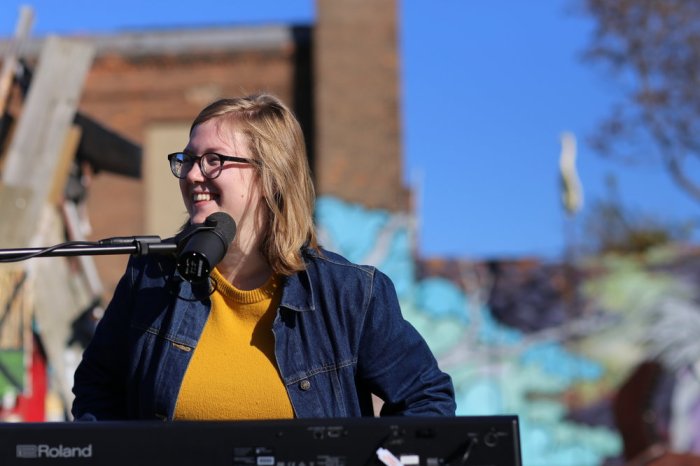 Gaietto and her three bandmates are getting ready for two live shows next month – Sept. 8 at Dally in the Alley in Detroit’s Cass Corridor district at 12:30 p.m., and Sept. 25 at The Pike Room with Your Smith and BAUM in Pontiac.

With additional shows under her belt and new ones on the horizon, Gaietto admits the live stage is more welcoming and exhilarating these days.

“I used to be so shy and scared to share anything, and then now, when I’m on stage doing my own music, there’s this feeling I get from the crowd that’s so exciting and feels really at home for me,” Gaietto said. “I’m way less nervous on stage than I am in other aspects of my life right now. I didn’t think I’d ever get to that point, but it feels natural, and it feels like the right thing.”

Gaietto also hopes to go back into the studio soon to record her first full-length album. She’s planning to team up with Elise McCoy, DIME’s head of recruitment and admissions, and her band to record three or four demos and shop them around to indie labels.

“I’ve thought about crowdfunding a lot, but I haven’t made a hard decision,” she said. “I see a lot of folks on Twitter who have used it. I’m very curious about it. I haven’t taken the time to set it up yet. It’s so cool that stuff exists now. That’s something that’s in the back of my mind.”